The dichotomy of America’s coexisting dreams and nightmares has entertained the world for decades. Perhaps this is the true demise of the so-called “Blacks” in Amerikkka that can’t seem to recover from the atrocities of the Jim Crow era. As millions upon millions have immigrated to the North American continent in pursuit of a dream, those whom were here and brought here against their will have suffered a nightmare as a consequence of the international trespassers. Of course, this is no longer the issue. Nowadays, the suffering of the nonwhite countrymen has become the soul of entertainment.

Rhythm and Blues, hip-hop, and motion pictures are channels through which Black folks have chosen to express their pain, and the return on expression has produced the most famous entertainers in the world. Are we mocking ourselves?! Childish Gambino’s, This Is America, absolutely mocks and targets the descendants of the oppressed whom seem to feel like they are winning because they are rewarded handsomely for the expression. It is no secret that the way Black folks manifest their pain through art and sports has created a global addiction. The world is addicted to Black pain, and the entertainment industry is dependent upon it to be sustained, and the system is dependent upon it to remain intact. Ironically, the reward for such artistic genius is money, a symbolic token used as currency featuring the slave masters of America.

I, personally, am not a fan of Childish Gambino or anyone whom has prospered at the expense of the suffering of my people, however, the artist earned my respect and appreciation with this particular work. He is a part of the paradigm shift led by J. Cole and Kendrick Lamar that is beginning to make entertainment not so entertaining. Entertainment is becoming very uncomfortable. Revolution. The opening scene of the video shows off Gambino’s trendy dance moves that have swept nations in the clubs, but then concludes with a bullet through the head of Travon Martin’s father as he plays the guitar. Of course, Travon’s assassination may not have seemed political, but surely, it is the government’s way of letting those know who attempt to be mentally free, that we will allow anyone to kill you without consequence if you get too ahead of yourselves. All are agents of the government in America! Entertainers more-so now than ever.

The businessman wholly embraces this economic opportunity to capitalize on the revolutionary expressions of the contemporary artist. The expression has not come at any actual consequence other than the fattening of their pockets. Keep them hurting, and let the hurt produce the art, the art attracts the fanatics sedated in a trance, and the fanatics become pain addicts. America’s drug abusive society pops pills to numb the pain, then low and behold, hip-hop artists are popping pills in every other hit record. Then comes along a Kendrick Lamar and J. Cole to overtly call-out the self-destructive nature of modern day expression, and a witty Childish Gambino to simply mock the times.

Religion does not get a pass either. This is America, where God is no longer protecting the church, and armed ushers are the solution to preserve spiritual worship. ‘In God We Trust’ is featured on America’s money with that slave master who lived by the gun. This is America, where the impressionable youth will do everything their big brothers and sisters do to be cool. What are we teaching them to be? Killers, drug traffickers, pill poppers, whores, pimps, entertainers, and athletes; or to the contrary, politicians, policy enforcers, attorneys, false prophets, judges, and capitalists whom perpetuate this system set to self-destruct. Maybe not to the contrary, every team has an offense and defense, and all of the aforementioned so-called professions work toward the demise of the people. America cannot and will not survive itself.

Childish Gambino’s brilliant expression of America reveals the extensive power of the illusionist. They say if you want to catch how the magician does his trick, don’t look at the hand he’s showing you, look for the one he’s hiding. The distraction is indistinguishable from the contemporary artist. Indeed, the entertainer is the trick. As Childish Gambino performs front and center eyeing the lens of the camera, the world behind him burns. Riots, gang violence, mass murders, and even death upon the white horse are steadily at work behind him in the background. Meanwhile, those citizens opting out of entertainment and government work, essentially, the fanatics, make themselves useful by capturing the horrific events on their cell phones in this digital era. Ching ching! Now, the layman can earn a buck for selling video footage to media outlets that exploit Americans’ inhumane actions in casual commentary. Oh yeah, when you come up, or come down, in the States, it’s typical table talk to reflect on the latest mass shooting, political scandal, or outright rape of someone or someone’s culture. And then, we whoo-sah over a freshly rolled joint to witness death on loop over and over again. 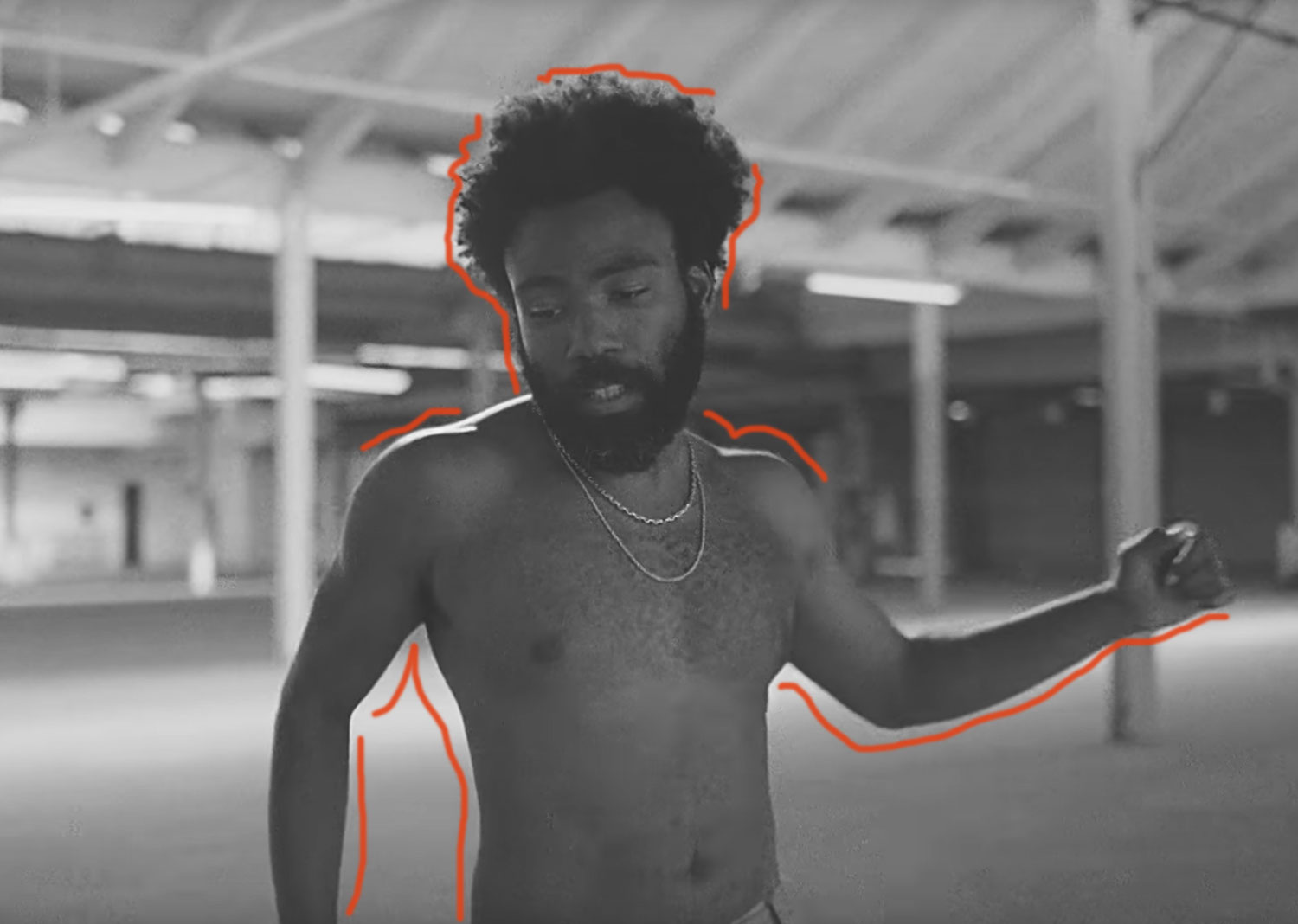 America has been sick since being infested in the 15th century. Her condition is near totally consumed by every entertainer going viral. As Childish Gambino buck dances on the rooftop of the old school whip, the chorus beautifully sings, “Get your money black man”, and it sounds so good, it entices ones to go out and chase the bag. If that’s all you hear and don’t see what is being communicated, then the bag is your end game. This is America, where citizens consciously choose not to see or hear if the reality compromises their pursuit of the bag. That’s being dumb on purpose. A life of purpose as an American must be dumb. The entertainers have proven time and time again, capturing the bag is the end. I know the symbol of that money, so, I hear, “Serve your master black man.” That at least allows me to be smart.

The video presentation closes with Childish Gambino running for his life, being pursued by all types of professionals and fanatics chasing the bag. Maybe the entertainer is the target. Who is the entertainer anyway? According to the cultural pattern established by the entertainment industry, the struggling, suffering, organic artist once expressing their pain that managed to engage the masses with their exceptional work, eventually gets the bag and becomes the entertainer.

The American dream has become a global nightmare, and as nightmares force us out of our sleep abruptly to escape the visual torment, Americans have awakened to a nation that has gone full retard. All hell has broke loose.

See the video below.